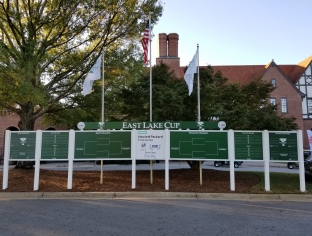 What is the East Lake Cup? Format, history, how to watch

The NCAA golf season may not be here officially, but don’t worry, there’s still plenty of exciting golf on tap this week with the third edition of the East Lake Cup.

Here’s everything you need to know about the tournament:

A stunning (and chilly) first morning for the @eastlakecup. Coverage starts live on @golfchannel at 3 pm ET. pic.twitter.com/JEjq8vqZEb

WHAT: “Modeled after the NCAA Golf Championships, the format for the East Lake Cup consists of an opening round of stroke play to crown an individual male and female champion and determine seeding for the following two days of match play competition.”

WHO: The eight semifinalists from the 2017 Division I men’s and women’s golf national championships.

WHEN: Monday, October 30 through Wednesday Nov. 1.

*individual championship was added in 2016