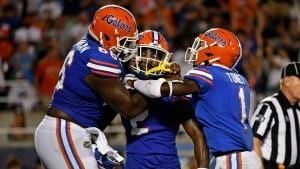 
No. 8 Florida is now 22-0 in season openers as a Top-10 team after the 24-20 victory over Miami on Saturday night. A win against the unranked Hurricanes was expected. What wasn’t foreseen was Miami’s aggression and ability to pressure the Gators into a hole that nearly deteriorated Florida’s 2019 goal of reaching the College Football Playoffs.

The dream is still alive, though questions were definitely raised. Here are three key takeaways from Florida’s escape:

Miami led Florida midway into the third quarter, 13-7, after the ‘Canes overshadowed the Gators in the first half with a go-ahead touchdown late. The lead eventually fell away, but a statement was made. Florida didn’t look like the Top-10 team AP voters expected — and Miami’s in good shape despite the nail-biting loss.

So proud of these guys. They found a way to win. 🔶🔷💧 pic.twitter.com/XKG5DtFr3V

This won’t hurt the ‘Canes hopes for a division title and possible conference championship appearance. If anything, they proved to be a legitimate competitor, especially with their manageable remaining schedule.

Coming into the anticipated in-state rivalry, a loss for either team was known to be a blow to possible bragging rights and the trajectory of their season. That accusation is not true for Miami, however.

The ‘Canes saw their fresh new quarterback battle through intense pressure. Redshirt freshman Williams went 12-for-14 with 158 yards and one touchdown in the first half, and he ended the night throwing 19-for-29 with 214 yards and one touchdown. The reason for newfound hope in the Miami program is Williams; he proved why coach Manny Diaz chose to elect the freshman as playcaller.

But Miami’s offensive flaws, specifically with the line, were highlighted until Williams was allowed to show off his poise and confidence in the pocket. In the final drive of the first half, Williams and wide receiver Jeff Thomas converted on 3rd-and-15. The drive ultimately ended in Miami’s first touchdown of the night, and a 13-7 lead going into the second half.

The momentum was short lived, as the Gators held Miami to -2 yards and secured 10 unanswered points in the third quarter. The projected winner regained confidence and eventually fought back to win after a wild fourth quarter of penalties and fumbles.

Florida proved to be the better team after going 4-4 on fourth downs and capitalizing on Miami’s mistakes.

But No. 8 Florida had the most to lose, though the win keeps its lofty aspirations intact. Still, the close game could hurt the Gators in the next AP Poll.

After a 4-7 2017 season, the Gators answered vehemently in 2018, going 10-3 and earning a New Years Six bowl game berth under new leadership in head coach Dan Mullen. Expectations were high.

Though the Gators surpassed expectations last season, the margin between Georgia and Florida remained large, as the Bulldogs clobbered them 36-17. Georgia will likely be the gatekeeper to the SEC Conference title game again this season, and the progression of the program in Florida is needed in order to challenge Georgia for the SEC East title. The Gators have the defense, marked by their 10 sacks on Saturday. But the offense needs to do more.

The Gators captured and sustained the 24-20 lead seven minutes into the fourth quarter. Quarterback Feleipe Franks regained possession after Miami missed a field goal, and completed a 65-yard pass to Josh Hammond on the drive’s first play. The veteran quarterback then sneaked into the endzone for the 3-yard touchdown.

COLLEGE GAMEDAY: Who did Lee Corso pick to win the in-state rivalry?

The wacky game was defined by the flaws of both offenses while glorifying their defenses’ abilities to create havoc and turn the momentum of the game.

Florida wasn’t alway impressive, contradictory of their preseason Top-10 ranking. But it did what it set out to do — beat Miami.