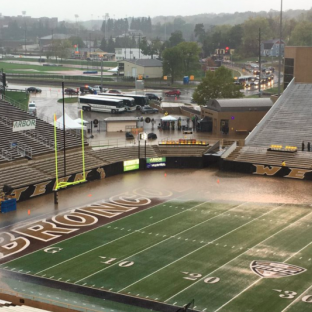 KALAMAZOO, Mich.  –  Saturday’s Western Michigan football game against Akron has been postponed to 1:00 p.m. ET on Sunday, Oct. 15 due to heavy rain and lightning in the Kalamazoo area.

Multiple lightning delays pushed back the game time as heavy rain continued to hit the Kalamazoo area. Flooding in the area along with standing water on the playing surface forced the postponement.

Go zips! We are going to need a bigger boat! pic.twitter.com/UbJWrDpyAS

After discussions with the athletic directors from Western Michigan, Akron and officials from the Mid-American Conference, it was decided that the game be moved to Sunday.

Fans with a ticket to today’s game will be honored tomorrow. For fans who are unable to attend tomorrow’s game, you will be offered an equal number of tickets to any future home WMU athletic event. If you are unable to attend the game, the process of exchanging tickets will begin the morning of Monday, Oct. 15.

Per weather protocol, each lightning strike, the 30 minute delay clock restarts before teams can take the field for warm up. pic.twitter.com/soWDJVDEbA