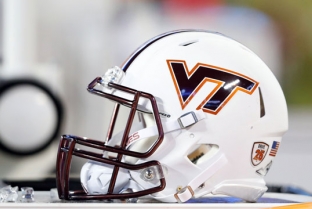 One loss came against a team that was “maybe one of the best we’ve ever played,” according to Virginia Tech defensive coordinator Bud Foster.

Another shortcoming took place when Virginia Tech was dealing with defensive uncertainty. The most recent failure was just plain painful.

Despite having Tech fans show up in droves and turning FedExField into a Lane Stadium North when the Hokies have visited in the past, the home of the Washington Redskins hasn’t been kind to Tech. With No. 21 Virginia Tech set to open its season Sunday night in the stadium in Landover, Md., against No. 22 West Virginia, Foster is convinced there’s no need for exorcisms or rituals to remove any lingering curses from the field.

“It has nothing to do with the stadium,” Foster said. “It has something to do with how we perform and how we play, and those first two games were first games of the year. …Those were some really tight ballgames against some great opponents. If we execute just a little bit better, we have a chance to win both of those games, but in both of those years, I will say that we went on to win the ACC.”

All of Virginia Tech’s losses in previous trips to FedExField involved the Hokies surrendering second-half advantages.

West Virginia certainly falls in the “quality people” category mentioned by Foster. Given the proximity of West Virginia’s campus to FedExField (just over three hours), the Mountaineers’ faithful could end up being just as visible as Virginia Tech supporters.

Here’s a look at our end zone in @FedExField before the tarp went down! #Hokies pic.twitter.com/o5XA0qgLOj

Crowd volume might be a factor as the programs renew their once-bitter rivalry for the first time since 2005, but West Virginia’s personnel and unique approach on both sides of the ball will be more of a test of Virginia Tech, which will have redshirt freshman quarterback Josh Jackson playing in his first college game and a defense that returns seven starters.

Coming off a 10-3 season and No. 18 final ranking in what was Coach Dana Holgorsen’s sixth year in Morgantown, WVU brings back just four returning starters on offense, but there are potential weapons that could help the Mountaineers retain their reputation for having a high-powered, up-tempo spread offense.

West Virginia was 17th in the nation last season out of 128 Football Bowl Subdivision programs in total offense (485.5 yards per game).

Quarterback Will Grier, who transferred from Florida last year, is back on the field after sitting out last season at West Virginia per NCAA transfer rules. He was voted the Big 12 Preseason Newcomer of the Year.

“We just see a guy who likes to fit (passes) into windows and is definitely a good quarterback,” said Virginia Tech’s Greg Stroman, who will have Adonis Alexander starting with him at cornerback, but it remains to be seen how much Tech will get out of cornerback Brandon Facyson (who had a cast removed Monday from an injured right hand/lower arm). “We’ll be ready to play against (Grier).”

Grier, who went 6-0 as a redshirt freshman starter in 2015 for Florida, will have a full stable of running backs behind him. In addition to Justin Crawford, the Big 12’s leading returning rusher after gaining 1,184 yards last season, Holgorsen indicated this week he could use as many as six running backs, including two true freshmen.

Offensive coordinator Jake Spavital, a 32-year-old Tulsa, Okla., native who grew up in the mid-1990s idolizing current Virginia Tech coach Justin Fuente when Fuente was the quarterback at Union High in Tulsa, will direct West Virginia’s offense for the first time Sunday. Holgorsen has no apprehensions about giving up play-calling duties and handing them to Spavital, who came to West Virginia in the offseason after spending last season as California’s offensive coordinator and quarterbacks coach.

“I think it’s going to be beneficial for us, because I can kind of do some other things,” Holgorsen said. “We had our mock game (last) week and we looked way more in-tune with the transitional stuff and game-management stuff and getting guys on and off the field and directing the sidelines the way it’s supposed to be done, so I think that’s going to help. If I didn’t think it was going to help, I wouldn’t have done it.”

West Virginia’s 3-3-5 defensive alignment can create confusion for quarterbacks who rarely see such an odd scheme, but the Mountaineers weren’t terribly effective last season at keeping offenses from moving the ball. West Virginia was 74th in the nation in total defense (425.9 ypg), but it was a solid 35th in scoring defense (24 ppg).

Jackson will have experienced wide receiver Cam Phillips and running back Travon McMillian at his disposal along with three returning starters on the offensive line, as the Hokies look to push the pace at times.

“It’s not much of a challenge, it’s just different,” Jackson said of preparing for a defense that employs a three-man front. “You’ve just got to, like, recognize things and how they play it versus how a 4-3 defense would play it. It’s just focusing on that. Once you kind of understand what’s going on, it’s a lot easier.”

Getting off the right foot against West Virginia after taking the ACC’s Coastal Division crown last season would be an encouraging sign for Virginia Tech that its offensive transition is coming along well. However, Fuente understands West Virginia’s own offensive changes and the Mountaineers’ unconventional defense present challenges in a place where the Hokies have never won.

GET UP – IT”S GAMEDAY

“There’s an element of unknown,” Fuente said. “They’ve got a transfer quarterback that was on his way to a fantastic career at Florida that’s now eligible to play for (West Virginia). I think he’s really talented. They’ve always had skill players. It seems like every time I’ve ever seen West Virginia play, they’ve had wide receivers and running backs that could stretch the field and make plays in space. This year will be no exception to that. Defensively they understand their scheme. They play incredibly hard. They can do several things to give offenses problems.”

THE BUZZ: Most of the kids on both teams don’t remember when this rivalry was as important as any game on the schedule for either team, but that doesn’t mean they can’t grasp the importance of this one in the present day. Meeting for the first time since 2005, Virginia Tech and West Virginia could use a win to carry over momentum from 10-win seasons last year. Virginia Tech will depend on redshirt freshman quarterback Josh Jackson to live up to his reputation as a good decision-maker against a West Virginia defense that was tied for 24th in the nation last year in takeaways (25). How he manages against the Mountaineers’ 3-3-5 defensive alignment will be critical to the Hokies’ chances of starting 1-0. Quarterback Will Grier, a transfer from Florida, is a dual threat in the passing and running games. He’ll get support from a backfield that features running back Justin Crawford, who ran for 1,184 yards last season. It’ll be up to a Tech defense that boasts seven returning starters, led by left outside linebacker Tremaine Edmunds, middle linebacker Andrew Motuapuaka and a talented secondary, to slow down Grier.

This article is written by Norm Wood from Daily Press (Newport News, Va.) and was legally licensed via the Tribune Content Agency through the NewsCred publisher network. Please direct all licensing questions to legal@newscred.com.