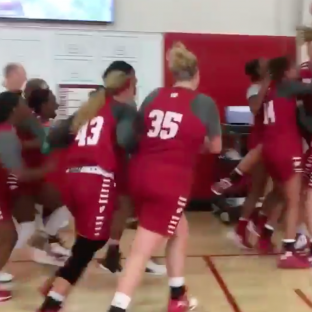 Badgers coach Jonathan Tsipis had the team gathered around the whiteboards and TV monitor in their practice gym and began talking about the importance of walk-ons and what they meant to a prorgram. As Tsipis began listing some of the great walk-ons in Wisconsin history, most notably Watt, an eruption from the team interrupted him before he could even finish his sentence.

Congratulations to @Lexy_richardson on receiving a full ride scholarship for this season! #Badgers #HardWorkPaysOff #OnWisconsin pic.twitter.com/URsxBbVk8G

The Verona, Wisconsin native appeared in 13 games for the Badgers last season and played in three during the 2015-16 campaign.

If football season was any early indication, all the feels from scholarship videos will likely continue into the basketball season.