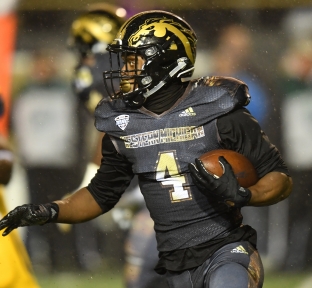 Well, have yourself a day, Darius Phillips.

Western Michigan’s senior defensive back returned a 100-yard kickoff touchdown for the second time in as many games this season in Saturday’s Week 2 matchup with Michigan State.

ARE YOU KIDDING US!?

WMU’s @4DariusP takes one 100-yards to the for the second consecutive week! #LetsRide #MACtion pic.twitter.com/edWxqmNinf

The fourth quarter special teams return was Phillips’ second touchdown of the game. He also returned a fumble for a 67-yard touchdown early in the third quarter. The Broncos lost 28-14, with Phillips accounting for both scores.

Phillips is no stranger to the end zone. He scored on a 100-yard kickoff last week against USC that tied the game at 28 early in the fourth quarter.

Before that, Phillips returned kicks the full length of the field against Georgia Southern last season and Michigan State again in 2015. Phillips now has 13 career touchdowns for the Broncos coming in five different ways.