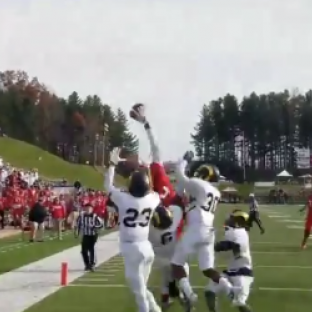 UVa-Wise has had a fine season. Sitting at 5-5, they had a tall order trying to get above .500, hosting the No. 2 Shepherd Rams in DII fotball’s final weekend.

Junior wide receiver Kaian Duverger made sure he gave the Cavaliers a fighting chance.

Trailing 42-21 late in the third quarter, UVa-Wise found itself in the red zone. Quarterback Jake Sturgill rolled out and chucked the ball to the corner of the end zone. While it seemed like there was nothing but the white jerseys of the Rams defense, Duverger made sure it ended up in the right hands.

Or in this case, hand.

Take another look from the end zone to see how athletic a catch it was.

The touchdown was part of a huge third quarter for the Cavaliers. They outscored the Rams 21-7 as Duverger scored twice to get the Cavs back in the game.