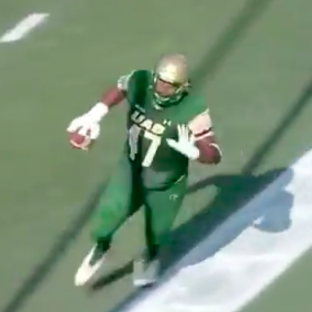 WATCH: UAB's Anthony Rush swats a pass, then completes the pick-six himself

After two dormant years, the UAB football team returned Saturday afternoon with a battle against the Alabama A&M Bulldogs in Birmingham.

It’s been, by all accounts, a triumphant return.

The Blazers took their opening drive 76 yards for a touchdown, and tacked on 10 more points by the middle of the third quarter, before defensive lineman Anthony Rush did something incredible:

On a day already replete with pick-six action, it’s not a stretch to say this one might be the best yet.

The score combined pass-blocking, hand-eye coordination, and a quick 25-yard scamper into the end zone by Rush. What’s not to like?