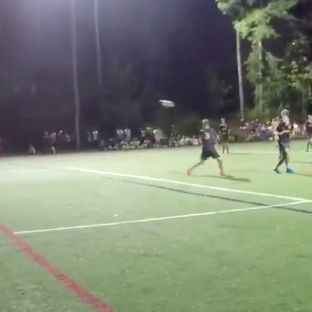 On Friday night, the Oglethorpe Stormy Petrels trailed Centre College by a goal late in their Southern Athletic Association opener.

Despite out-shooting the Colonels by a good bit, the Stormy Petrels were scoreless in the first 87 minutes of Friday’s match, desperate for an equalizer.

There are no words.

That’s an astounding combination of timing, athleticism, and clutch scoring from Patterson, who managed to tie the match with mere minutes to go with his strike.

“That was a pretty special goal for Devon, probably the goal of a lifetime,” Oglethorpe head coach Jon Akin said after the match.

Neither team managed to pull out the win after two periods of extra time, which means Patterson’s incredible goal was ultimately worth just one point in the standings.

Of course, that’s before you factor in Patterson’s style points.