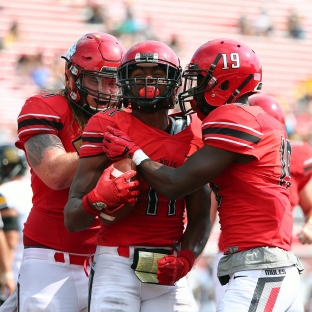 EMPORIA, Kan. — Central Missouri Mules Football (3-1) got off to a slow start on the road, but a 30-10 run in the second half and a last second fumble recovery to score gave them a 37-31 win over the 15th-ranked Emporia State Hornets (2-2) on Saturday afternoon at Welch Stadium.

• Emporia State scored on its opening possession of the game on a five yard rush. The lead did not last long as the Mules tied it up on a 49 yard scamper by Devante Turner. The Hornets retook the lead in the same quarter on 20 yard touchdown pass to make it 14-7 lead.

• The Hornets pushed their lead to to 21-7 on the only score in the second quarter with 14 yard touchdown pass.

• Despite trailing nearly the entire game, the Mules never quit. A one yard run by Jaylen Zachery on the Mules opening drive of the second half, cut the Hornet lead to seven, 21-14. Emporia State added a 25 yard field goal to put the lead back to 10, 24-14. The Mules added one more touchdown in the third on a 36 yard touchdown pass from Brook Bolles to Tyler Nugent, making it a 24-21 deficit going into the final quarter of play.

• The Hornets opened up the fourth quarter with a seven touchdown run, but the Mules added the final three scores to secure the win. Alex Langer nailed 23 yard field goal to cut the Hornet lead to 31-24 and Bolles tied it up at 31-all with 12 seconds to play.

• The final play came on a fumble recovery by Kolesen Crane at the ESU 35 yard line and took it to the five yard line before he fumbled it and Austin Miller picked it up in the end zone for the win, 37-31.

It was Over When

• It seemed that the game was set for an overtime battle between the teams after the Mules tied it 31-31 with 12 second left in the game. Despite never leading the game against the Hornets, it was truly over when the Mules forced the fumble on a backwards pass by the Hornets. In a sequence of fumbles, the Mules recovery of the ball in the endzone as the clock expired was the dagger to give them the win.

• Bolles finished the game with 26-of-39 passing for 358 yards and two touchdowns. He also added 59 yards rushing on 19 carries

• Turner had 96 rushing yards on 10 carries to lead the Mules ground game.

• Zachery led the Mules receiving corps with 153 yards on eight catches. He also had 15 rush yard on two carries and one touchdown.

• On the defensive side, Monteze Latimore finished the game with seven tackles, all solo, to lead UCM. Franklin Huntand Codie Bell both added six tackles apiece while Miller had five tackles and the gamewinning fumble recovery for the touchdown. This is Miller’s second straight game with a defensive touchdown.

• Running back Landon Nault led the ground game finishing with a game-high 135 rushing yards and two touchdowns on 25 touches.

• In the air, Justin Browns had a game-high 157 receiving yards on 14 catches and had one touchdown.

• Defensively, Gabe Cleveland had a game-high 13 tackles for Emporia State.

• With the win, the Mules end a two game skid against the Hornets and push the series lead to 40-19-4 all-time.

• With his numbers on Friday, Zachery is now second all-time in Mules history in receptions with 142 career catches and is also second in career receiving yards with 2,235. He needs just four receptions and 119 receiving yards to become the Mules all-time leader in both categories.

• The Mules win over Emporia State is their first against the Hornets since 2014 and is their first win over a ranked opponent since defeating No. 22 Central Oklahoma back in 2014.