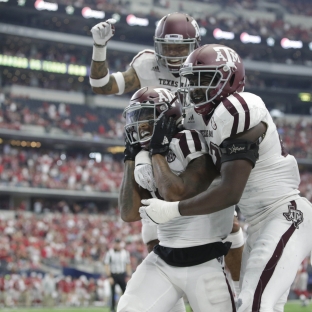 Texas A&M and Arkansas each scored at least one touchdown in every quarter of the Aggies’ 50-43 overtime win, but it was defense – Armani Watts’ game-winning, diving interception in the end zone – that clinched the victory. Arkansas led 21-7 early in the second quarter but Texas A&M rallied on more than one occasion to force overtime.

RELATED: The best college football games of the weekend

Texas A&M scored on the first possession of overtime, then Arkansas quarterback Austin Allen’s throw to the end zone was picked off by Watts, who dove in front of the intended receiver.

Here’s how it ended! @GGPR_BANGER5 seals the win with the interception! #12thMan pic.twitter.com/VKsjwVhghv