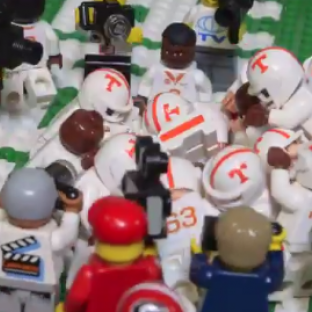 It just wouldn’t be football season without some stop-motion Lego action from Gold Yeller.

As this weekend’s full slate of football approaches, Jacobs recreated what he called the most exciting game from last season. It certainly was a memorable one.

Georgia and Tennessee exchanged touchdowns in the final seconds of an Oct. 2 thriller in Athens, Georgia. The Bulldogs scored the go-ahead touchdown, a 47-yard bomb from Jacob Eason to Riley Ridley, with just 10 seconds left.

Those 10 seconds proved too much.

A big kickoff return gave Joshua Dobbs and the Volunteers offense one last chance. Dobbs then delivered a miracle heave to a leaping Jauan Jennings for the game-winning Hail Mary. Jennings’ reception, an ensuing melee of Vols in the end zone and a teary-eyed Butch Jones taking a knee on the field instantly became some of the most memorable images of the 2016 FBS season.

It’s safe to say that Gold Yeller once again captured real life in Legos like no one else can. Here’s the final seconds of that game in real-time, so you can see just how close he captures the emotion of that October day.