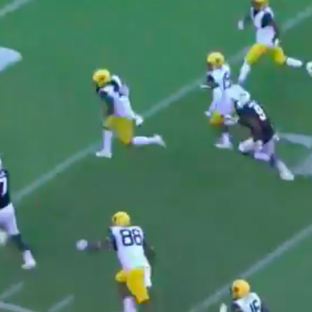 After one half in Fort Worth, the much-anticipated matchup between two fiery offenses in No. 8 TCU and No. 23 West Virginia had amassed just 10 points. It was a bit of a head-scratcher. Where were the fireworks?

Turns out, the two teams were saving them for the third quarter.

The two squads combined for 31 points in the third frame, capped off by the piece de resistance, a 48-yard touchdown catch — yes, catch — for TCU quarterback Kenny Hill to put the Horned Frogs up 24-17.

In a little bit of trickery, TCU handed the ball of to Kavontae Turpin, who took it toward the right sideline before reeling back and returning the ball to Hill.

From there, it was all Hill:

The Frogs break the tie with one from DEEP in the playbook! #BeatWVU pic.twitter.com/syOHUHP1lt

The whole play was a delight, but the 360-degree spin move to keep things going toward the end zone was inspired.

Kenny Hill was the 10th different Horned Frog to catch a touchdown pass this year. Unsurprisingly, this was also Hill’s first career reception, and it was certainly a good one.

Maybe he should catch the ball more often?