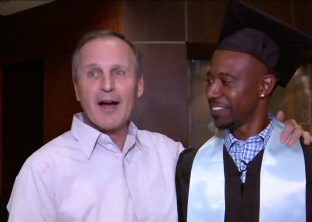 Fourteen years after last stepping onto the Frank Erwin Center court as a Texas basketball player, T.J. Ford returned to Austin on Friday to pick up his degree as part of the graduating class of 2017.

Ford was a standout Longhorn for two seasons (2001-03) and was a winner of both the Wooden Award and Naismith Award in 2003. He then declared early for the NBA draft and was the eighth overall pick by the Milwaukee Bucks. The point guard, now 34 years old, played eight seasons in the NBA.

Ford returned to the university about two years ago to start working toward completing his degree, following the abrupt end to his NBA career due to a neck injury. He walked at Friday’s graduation, earning a degree in applied learning and development: youth and community studies with a minor in educational psychology.

Adding to the special moment, Ford’s former coach at Texas, Rick Barnes, attended the ceremony and shared some heartfelt time with Ford. Barnes said Ford called him about a month ago and that he promised to be in attendance Friday. Thanks to Chris Tavarez at KXAN, here’s the amazing exhange between the duo:

Rick Barnes came back to #Texas to watch TJ Ford graduate 15 years after he first stepped on campus. Watch this emotional exchange: pic.twitter.com/prkmCPqvpO

“I’m so happy for him. Proud is an understatement, but he deserves it more than anybody,” said Barnes, now head coach at Tennessee.