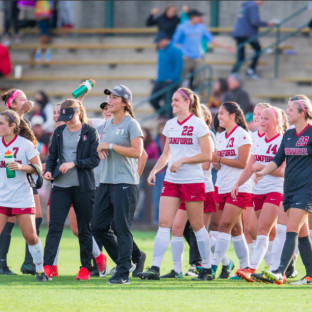 Watch: Stanford women's soccer scored four goals in 25 minutes because it can

Stanford and Penn State entered Friday’s DI women’s soccer quarterfinals matchup with two of the highest-scoring matches of this year’s tournament. Stanford scored nine goals in its first round win over Utah Valley, while Penn State opened its tournament with a 7-0 win over Stony Brook. All signs pointed to an offensive explosion when the two teams faced off.

» Stanford’s 86 goals on the season are most in D1 @NCAASoccer since Virginia scored 88 in 2014. #GoStanford pic.twitter.com/kQ3SBAXQq7

What an incredible tournament, and season, the Cardinal are having.

Let’s look at each goal from Saturday’s first half, and you can try to decide which is the most impressive:

The first goal is a gem of a free kick from Catarina Macario, possibly the most impressive shot of the four goals. What’s a goalie supposed to do about that?

Long way to go, but we’re off to the right start. @sunshine_sully doubles the lead! #GoStanford pic.twitter.com/gEoCKiHCZv

This goal takes the trick-shot cake: through the legs of a defender? C’mon. And look at the curve after it skips off the ground. That’s a fun goal.

Incredible work by Carusa to get it in the box and Jaye does the rest. 3-0 inside 15 minutes played. #GoStanford pic.twitter.com/MuC8birpLS

Boissiere scored Stanford’s third goal 87 seconds after the team scored its second. This is probably the most “wait, how?” of the four, if only for how fast it happened.

4-0 with 20 minutes to play in the opening half — how about that assist by @catarinamacario? #GoStanford pic.twitter.com/BmXbo6EiXc

If you like teamwork in your goals, this is your candidate. The perfect assist from Macario (our first scorer!) finds Caruso’s foot in the right place, and she flicks it home for the fourth score of the day.

All four goals were pretty great. Was there a best one? Maybe, maybe not. Regardless, they all add up to give the Cardinal a staggering lead over PSU as they search for a semifinals berth.