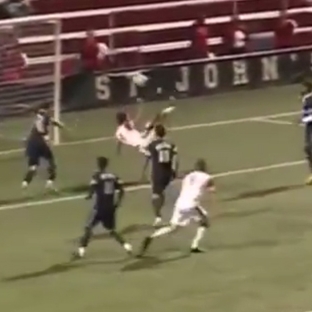 Sometimes, it seems like soccer players could possibly double as gymnasts.

This was definitely the case for St. John’s forward Filippo Ricupati, who displayed his acrobatic skills scoring in the 69th minute against Villanova.

Ricupati’s goal was the equalizer in a thrilling battle that went to double overtime. But he wasn’t done. The forward would go on to score an awesome header in the 102nd minute to win the game.

Senior midfielder Harry Cooksley set up both of Ricupati’s goals, which made for his third multi-goal game of his career. With the win over Villanova, the Red Storm improved to 7-6-2 on the season.