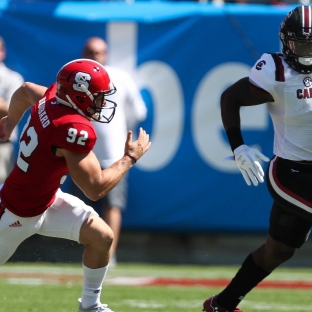 He followed that up with a six-yard touchdown catch in the second quarter, then a ridiculous one-handed touchdown grab in the third quarter.

He has four catches for 64 yards and two touchdowns in the third quarter.

Here is Samuel’s kickoff return for a touchdown.

Samuel made this highlight-reel catch after South Carolina quarterback Jake Bentley scrambled from the pocket and found his wide receiver in the end zone.

That throw by Bentley.