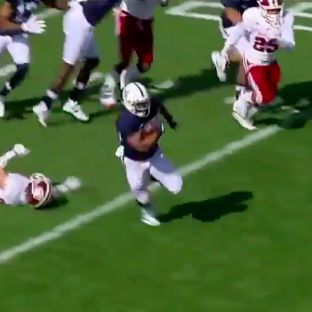 On the opening kickoff, Barkley fielded the ball on the left side of the field at his own two-yard line. He hit the correct holes, juked a kicker, and high-stepped away from a would-be tackler. Fourteen seconds after he caught the ball, Barkley was in the end zone on the right side of the field with six points in tow.

It was one heck of a way to kick the day off:

This man’s just from another planet.

Two weeks ago, James Franklin said he always wanted Barkley to be the Nittany Lions’ kick returner this season.

“Saquon Barkley is one of the more explosive players, if not the most explosive player, in the country when the ball is in his hands,” Franklin said at the time. “This is a way for us to pretty much guarantee that he gets the ball.”

It’s pretty hard to argue with that logic, especially after this incredible return, right?

Insanely, he wasn’t done. Later in the first quarter (still the first quarter!), Barkley made this astounding one-handed catch and then turned on the jets and the jukes for another highlight-reel worthy play:

Every week, @saquonb21 does something to drop jaws.

It’s gotten to the point where it isn’t even fair.#BTNStandout pic.twitter.com/95W65clC5D

After piling up 358 all-purpose yards against Iowa, Barkley is now chasing history as one of the best running backs in Penn State history, and plays like these are just adding to the legend.