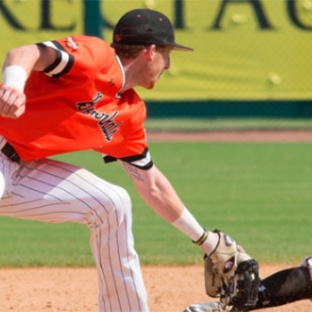 There’s something you don’t see everyday.

Sam Houston State came out hot in its first-ever trip to the Super Regionals. It put a quick three-spot on the scoreboard in the first inning and kept rolling from there behind some nifty defense — including a 5-4-3 triple play to get out of a third inning jam.

New pitcher Riley Cooper came on for Sam Houston State in the third. He allowed a leadoff walk and after back-to-back singles, the Seminoles were in business. One run was across and two were still on with no outs.

That is until Quincy Nieporte came to the plate. He hit a sharp grounder to Bearkats third baseman Taylor Beene, who quickly stepped on third before starting the around-the-horn trifecta. The Florida State threat was eliminated with three outs in a matter of seconds.

The Bearkats look to keep their Cinderella run going, as they hold on to a 5-2 lead over nationally-ranked Florida State.