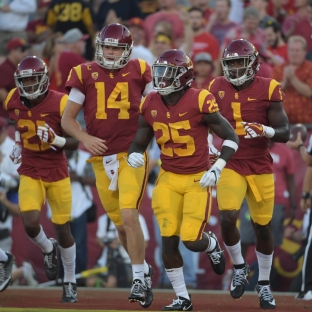 WATCH: Sam Darnold finds Ronald Jones for USC touchdown to close out crazy end to first half vs. Texas

It took a while for fans to see a touchdown at The Coliseum during Saturday night’s USC vs. Texas game, but once they did come, they were must-see scores.

After going the first 27:20 without a score on either side, the Trojans and Longhorns combined for three touchdowns over the final two minutes, 40 seconds. The final tally came on a 56-yard catch-and-run by USC running back Ronald Jones as time expired in the half.

The Trojans snapped the ball with four seconds left, Darnold rolled right out of the pocket before firing to an open Jones downfield. The speedy back then cut across the field at around the 25-yard line and simply outraced everyone to the end zone to give USC a 14-7 lead at the break.

Five seconds left? no problem…ANOTHER ONE!!!!

That score came just 15 seconds after Texas finally got on the board on a pick six that tipped off a receiver’s hand into Texas safety DeShon Elliott. Elliott had to reach low and just saved the deflection from hitting the turf. That tied the game at 7-7 after USC broke the shutout on its previous drive with a 15-yard connection from Darnold to Deontay Burnett at the 2:40 mark.

And what a touchdown grab it was.

Darnold delivered a strike on the run that Burnett had to lay out for in the very back of the end zone. He got both hands underneath and touched his knee inbounds to give USC the lead.

Better late than never for both sides’ scoring.