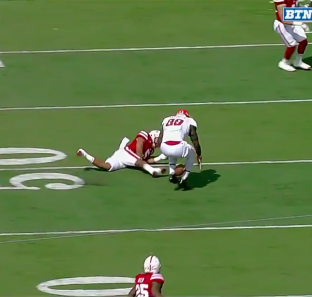 Rutgers tight end Jerome Washington entered himself into the discussion for catch of the year Saturday afternoon, using mainly his ankles and rear end.

In the first quarter of the Scarlet Knights’ game against Nebraska, Rutgers quarterback Kyle Bolin’s pass intended for Washington was nearly intercepted by Dedrick Young II when it was tipped up in the air in front of Washington.

Washington then caught the deflected ball with his ankles, and then falling to the ground secured it with his rear end before his hands were able to gain possession of the ball for a Scarlet Knights first down.

@RFootball CATCH OF THE YEAR pic.twitter.com/UPOui4bvph