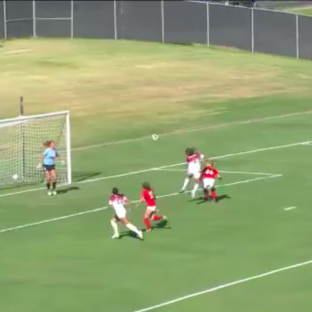 New Mexico State took 27 shots in Monday night’s match against Arizona Christian, but they saved their absolute best for last.

Junior forward Audriana Chavez took a perfect cross into the box from fellow junior Alexandria Otero and, in one perfect motion, connected on a header sending the ball into the upper lefthand corner to give the Aggies a 3-2 win in OT.

Seriously, if you were setting up a perfect game-ending play, it’d be hard to draw up something better than this:

The teamwork, between Otero curving her cross just barely around an oncoming defender, to Chavez boxing out her marker and positioning herself exactly right, was a sight to behold.

It was a nice slice of redemption for Chavez, too, after she had a second-half goal, which would have proven to be the winner, disallowed because of an offsides call.