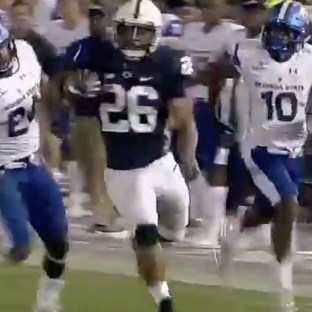 Saquon Barkley is almost too good.

As if we needed another reminder of the Penn State running back’s ridiculous speed, he gave one anyway, blowing past defenders for an 85-yard touchdown early in the first quarter against Georgia State on Saturday night.

Actually, this @PennStateFball highlight TD should surprise no one. pic.twitter.com/ffgKm2sbUR

With that catch, the sophomore put Penn State up 14-0 and entered the Nittany Lions’ record books.

.@saquonb21 is the first player in PSU history to have an 80-yard rush & 80-yard reception in his career. #WeAre pic.twitter.com/8mpCbzsrq6