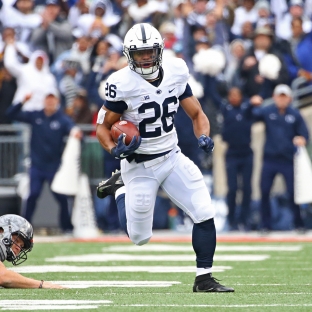 Saquon Barkley was already a top candidate in the Heisman race.

Then he started the biggest game of the year (so far) with this:

Absurdity. How many Heisman moments can one man have?@saquonb21 silences The Shoe with ANOTHER game-opening kick return TD! pic.twitter.com/xSPVYJ0o5k

Yes, that’s a 97-yard return off the opening kickoff, spotting No. 2 Penn State a 7-0 lead just 15 seconds into its game against No. 6 Ohio State in the Horseshoe, and Barkley makes his already-strong case even stronger.

Barkley has scored a touchdown in 15 consecutive games, the longest such streak in FBS.

Follow the rest of the game between the Nittany Lions and the Buckeyes here.