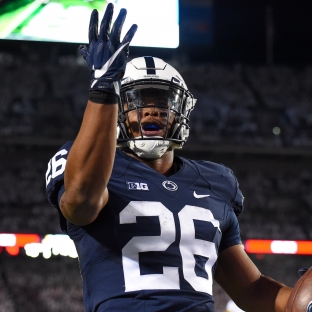 In case you haven’t heard, Penn State running back Saquon Barkley is good at football. Really good. He scored three touchdowns against No. 19 Michigan, including two in his first three carries of the game.

Barkley’s third touchdown came in the fourth quarter when quarterback Trace McSorley found him for a 42-yard score that served as the dagger against the Wolverines.

Barkley, who had a big drop earlier in the game, came dangerously close to another one as he bobbled and juggled the pass from McSorley before finally reeling it in for the touchdown.

Take a look at the play below.

Saquon … ARE YOU FOR REAL??? pic.twitter.com/DfMDGQWh4E