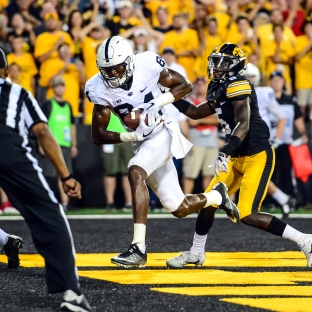 Trace McSorely and the rest of the Penn State offense were down to their last chance on fourth down, needing a touchdown from seven yards out to avoid being upset by unranked Iowa in its own building.

Big-time players make big-time plays with the game on the line, and McSorely delivered.

On the final play of regulation with the No. 4 Nittany Lions trailing 19-15, McSorely delivered a perfectly-placed ball into a microscopic window as his pass just barely went over the finger tips of a Hawkeye defender into the hands of Juwan Johnson to give Penn State the 21-19 walk-off victory.

Down to its final play, No. 4 Penn State hauls in a last-second touchdown to avoid an upset at Iowa. pic.twitter.com/TC0WINRXnS

But that was too much time for the high-powered PSU offense. The Nittany Lions drove 65 yards on 12 plays, including a fourth down conversion in their own territory, to avoid the upset at Kinnick Stadium. Iowa had knocked off the previous two top five opponents to come into Iowa City, including last year’s upset over Michigan.

McSorley’s walk-off game-winner was just the latest in an already exciting college football season, and it will surely be talked about for a long time.