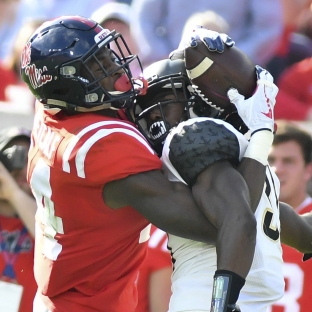 Former NFL wide receiver David Tyree’s acrobatic catch in Super Bowl XLII will live on in infamy after he trapped a pass from Eli Manning against his helmet, setting up the New York Giants’ game-winning touchdown against the New England Patriots in 2008. On Saturday, Ole Miss wide receiver D.K. Metcalf did his best impression – with a little twist.

Metcalf trapped a pass from quarterback Shea Patterson against the shoulder pad and helmet of Vanderbilt defensive back Tre Herndon for a 34-yard gain.

Watch the play below:

Is this one of the craziest catches of the year?!

Judge for yourself in this @CocaCola Instant Replay. pic.twitter.com/sDzUUEzUtW