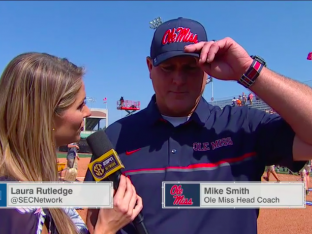 It was an emotional postgame interview for Ole Miss softball coach Mike Smith, whose Rebels just finished knocking off in-state rival Mississippi State in the first round of the SEC tournament.

Speaking with SEC Network’s Laura Rutledge directly after Wednesday’s 2-1 victory, Smith revealed that his grandfather had passed away at 102 years old earlier in the morning and that he wanted to dedicate the win to him.

“I love you and this one’s for you,” Smith said while holding back tears.

“We had a 100-year-old birthday (celebration) for him a couple years ago and he sat in his chair and told me how much he looked forward to watching our games on TV,” Smith told Rutledge.”I know he was looking forward to our game today and I’m so thankful that I got to spend the time that I did with him.”

The No. 19 Rebels now move on to play No. 1 Florida in the second round of the conference tournament on Thursday afternoon.