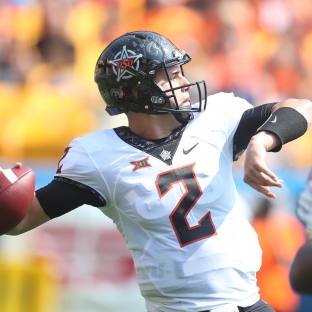 Mason Rudolph and Oklahoma State scored a combined 103 points in their first two games, so when the Cowboys arrived in Pittsburgh, everyone knew what to expect: offense, offense and more offense.

But no one could’ve expected what Rudolph did late in the first quarter:

That’s a staggering play, both from Rudolph and his target, senior wideout Marcell Ateman.

Rudolph, for his part, spins out of the pocket, evades a would-be tackler, high-steps away from another, and slings the ball far downfield.

And Ateman, after the play extends beyond his route, gets open, focuses on a tough catch, stays in bounds and goes all the way for six points.

Not a bad start to the game for the Cowboys, who seem unstoppable on offense right now.