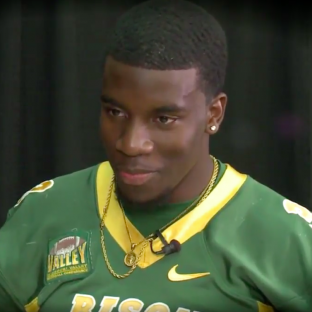 North Dakota State’s football team opened its season with a huge 72-7 win, racking up nearly 700 yards of offense, which means the Bison are up to their usual stuff: playing great football and competing on every single play.

And now, that level of competition is apparently carrying to off-field activities, like… telling jokes?

During the Valley News Live Bison Pregame Show, senior safety Tre Dempsey and junior safety Robbie Grimsley went head to head in a game called, “Herd This One?”, where the two competitors try to make each other laugh with the worst joke they have.

It didn’t take very long for the safeties to crack:

Unless you want to go to a video review, you have to call that a tie between the two veteran safeties.

But that’s okay: the Bison have a shot at getting back to their winning ways when they face Jacksonville State in a colossal Top 10 showdown.