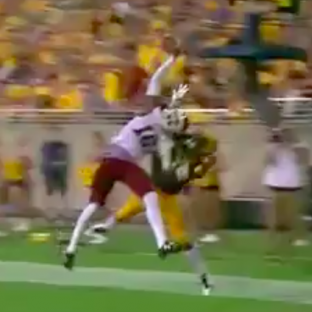 Between the first FCS-over-FBS victory, an extended nail-biter with the No. 2 team in the country, and a triple-overtime marathon, college football’s opening night had a little bit of everything.

It also might’ve had the best catch of the year… already?

He launched a pass to 6-foot-6 Jaleel Scott, who, while fighting through tight defense, extended and snared the kind of catch you have to see to believe:

After a relatively quiet freshman season in 2016 (23 catches, 283 yards, five touchdowns) Scott just might be someone to keep an eye on this year.