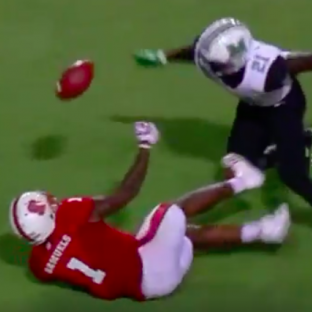 It’s only Week 2, but the race for the best catch of the season is heating up in a big way.

In Week 1, Arizona State’s Jaleel Scott put in his entry with an astounding end zone grab. Then, in Week 2, Georgia’s Terry Godwin made a catch with range you just have to see to believe.

But where Scott and Godwin used their respective catch radii to make their catches, NC State’s Jaylen Samuels relied on focus and reflexes for his Catch of the Year submission:

That’s some pretty solid concentration from Samuels, who used not his first, and not his second, but his third touch on the pass to come down with the ball.

Samuels and the Wolfpack prevailed over Marshall 37-20 on Saturday, and Samuels left the game with one heck of a notch in this young season.