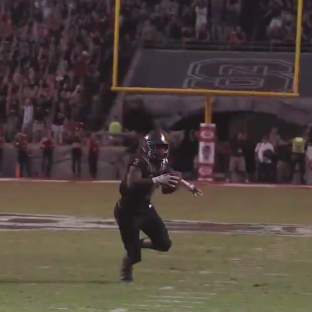 With the ball in the reigning Heisman Trophy winner’s hands in a one-score game with less than three minutes left in regulation, North Carolina State’s defense needed to make a play to hold onto a potential in-conference upset.

With Louisville on its own 11-yard line on second and 10, Pratt intercepted a tipped Lamar Jackson pass and returned it 25 yards for a pick six to secure a 39-25 upset win against the No. 17 Cardinals.

The win improves NC State to 5-1 (3-0 ACC)  while Louisville falls to 4-2 (1-2 ACC) and now finds itself two games back in the loss column to the Wolfpack and Clemson in the ACC Atlantic division.