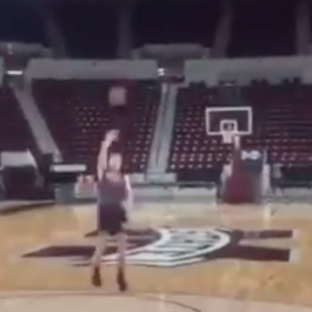 There are impressive shots in basketball, and then there is, well, this.

Mississippi State forward Mitch Storm hasn’t been with the Bulldogs for long after the 6-7 sophomore forward transferred from East Mississippi Community College after last season, but he’s already showing off some of his impressive skill set — like nailing one-handed shots backwards.

At the Bulldogs’ practice Tuesday, Storm was getting some extra shots up when he decided to square up from the top of the 3-point arc. But instead of attempting a regular shot, he turned around and flicked the ball over his head facing the wrong way for a perfect swish.

Don’t believe us? Have a look for yourself:

It’s still early, but Storm is making a case for being the best H.O.R.S.E. player in college basketball already.