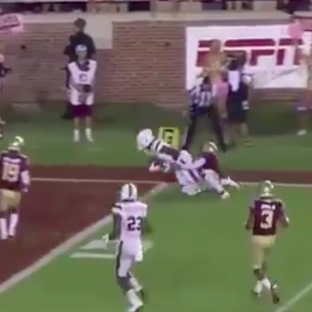 Heading into Saturday afternoon’s battle between No. 13 Miami (Fla.) and Florida State, the Hurricanes hadn’t managed to topple their Sunshine State rivals since 2009. It was tied for the longest win streak by either team during the rivalry, dating back to 1955.

And after a 20-yard touchdown pass from James Blackman to Auden Tate with just 1:04 left to play to put the Seminoles up 20-17, Florida State had a chance to tie the 62-game series at 31 wins apiece with an eighth straight win over the Hurricanes.

Instead, what we got in the end was even more dramatic:

What a way to end a drought!

Yep, you saw that right.

Malik Rosier, who finished the evening with 254 passing yards and three touchdowns, threw an absolute perfect pass to Darrell Langham from 23 yards out with just six seconds to play.

MORE: Florida State-Miami rivalry is fierce but friendly after 62 meetings

Rosier piloted the Seminoles down the field on a nine-play, 75-yard drive in just 1:18 for a game-winning touchdown. Talk about drama.

It took all 60 minutes, but the Hurricanes now move to a still-perfect 4-0, while the Seminoles fall to 1-3 on the season.