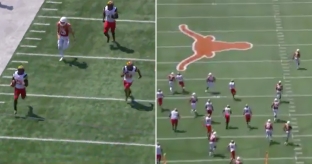 Pick sixes, kick and punt return touchdowns are always exciting plays in football, but aren’t that out of the ordinary. Blocked kicks returns, however, happen few and far between and can change the momentum of a game at a moment’s notice.

Rarely do we see a “block six,” but Texas and Maryland were lucky enough to deliver it twice. In the same quarter.

Less than 10 minutes later, Longhorns cornerback Holton Hill, who earlier in the game had a 31-yard pick six to start the scoring, matched Brooks Jr. by returning a 65-yard blocked field goal to end a 27-0 scoring run for Maryland.

#Texas returns the favor with a BLOCK SIX of their own! Holton Hill (@Hollywood__5) finds the end zone for the 2nd time today! #HookEm pic.twitter.com/8wlvr5Uyk3

Texas’ Holton Hill is the first player in the last 10 seasons with a pick-six and a blocked field goal return for a TD in the same game.

In the previous three matchups between the Terrapins and Longhorns, Texas outscored Maryland by a combined score of 102-0. At the half, the Terps lead 30-14.

The Longhorns, who are playing in their first game under Tom Herman, have lost 39 consecutive games when trailing by 14 points or more. Their last win under those circumstances was Nov. 3, 2007 when Texas scored 24 unanswered points in the fourth to secure a 38-35 come-from-behind victory against Oklahoma State.