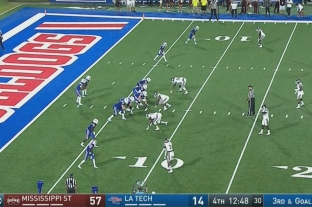 WATCH: Louisiana Tech lined up for a third down and goal 93 yards from the end zone

Early in the fourth quarter of a game largely out of reach, Louisiana Tech lined up for a third & goal play on the seven-yard line. Nothing out of the ordinary, just a normal situation close to the goal line late in a game.

Well, there was one unusual part of the play: it was on its own seven-yard line.

On second down and goal from the Mississippi State six-yard line, Louisiana Tech snapped the ball, and then everything sort of broke down. But broken plays happen all the time in football, right?

Well, this one was unique:

Because no player from Mississippi State ever actually picked up the fumbled ball and established possession, the ball never technically changed hands.

Which meant by the time Louisiana Tech wide receiver Cee Jay Powell recovered on his own seven-yard line, and the play ended, the ball had traveled 87 yards in the wrong direction.

So Louisiana Tech had third and goal to go… with 93 yards between the line of scrimmage and the end zone.

College football is the best.