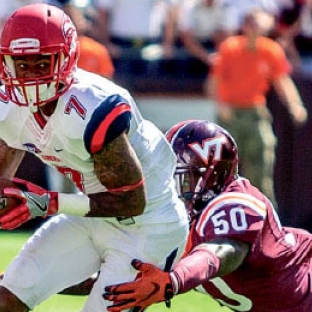 If you’re a defender trying to stop Liberty wide receiver Damian King, you better have strong ankles. King’s elusiveness and shiftiness were on full display during Liberty’s game against Morehead State on Saturday.

King caught a screen pass, then immediately juked out Morehead State defensive lineman R.T. Sutherland, sending him flying to the ground, before the wide receiver weaved his way 42 yards to the end zone. He was barely touched as he gave Liberty its second touchdown of the game.

You can watch King’s touchdown below:

Damian King shows of the juke move and takes it to the house!