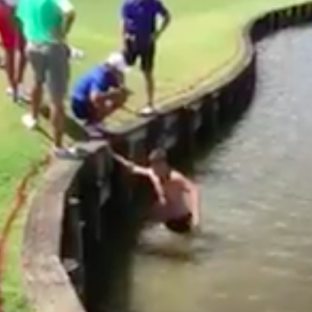 WATCH: Jacksonville golfer drops ball in water, strips down and attempts to find it

Jacksonville men’s golf had an eventful Day 3 at the Baton Rouge Regional on Wednesday.

On a round that ended with the program clinching its first-ever appearance in the NCAA Championship finals, perhaps the most memorable moment of the day instead came on the 13th hole.

Per www.news4jax.com, senior David Wicks picked up his ball after his first putt of the hole and put it in his pocket. Before his next turn on the greens, upon reaching for his scorecard in the same pocket, his ball fell out and rolled into the lake behind him. As NCAA rules state, in order to finish the hole without penalty, Wicks had exactly five minutes to retrieve the ball.

With a championship spot on the line, Wicks sprung into action by stripping to his underwear and diving into the lake to find his ball. Unfortunately for him, it couldn’t be found and Wicks was assessed a two-stroke penalty. Watch the crazy scene here:

@JUDolphins Here’s video of Wicks looking for his ball. Just talked to him: “I was determined to redeem myself. That wasn’t the way I was going out.” pic.twitter.com/KoqjiOd2O6

The penalty didn’t dampen Jacksonville’s Day 3 comeback, however, as the final round ended on a high note for the Dolphins. Jacksonville erased a 10-stroke deficit to start the day and defeated Northwestern in sudden death to earn fifth place in the regional competition. The top five teams in each regional advance to the championships on May 26-31.

As for Wicks, he finished the regional in seventh place (+3) on the individual leaderboard and still managed to post a 1-under score in Wednesday’s round. Not a bad bounce-back.