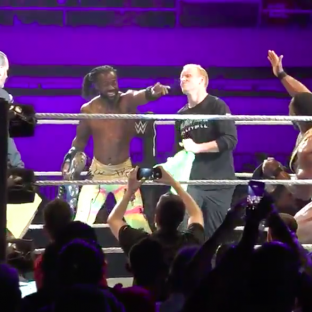 Hunter Hughes, a quarterback at Hawaii, took a unique path to the Rainbow Warriors’ roster: a native of Illinois (that’s a long flight), Hughes went on a three-year mission assisting the poor and teaching English abroad in Taiwan, Nepal, Kenya, and Sudan before enrolling at Hawaii.

Not the most traditional route, to say the least.

Once he arrived at Hawaii, Hughes took up an animation major and played his part on the football team as a regular member of the Rainbow Warriors’ scout team. He’s been part of the team since 2014, and he’s never appeared in a game during his time on campus, but Hughes knows his role and loves his team.

And on Wednesday night, when the WWE came to to Honolulu, Hughes was in the crowd… until he was called up on stage, where he was rewarded for his dedication in a one-of-a-kind way:

Hunter Hughes, you gotta dance for it they say! Full scholarship handed out by @NickRolovich at #WWEHonolulu tonight! @HawaiiFootball pic.twitter.com/r7espcYrWw

Thank goodness Hughes, on top of working hard at school and football, has had time to practice his dance moves these past four years.

Nothing beats watching a player be awarded a full scholarship, but doing it in a wrestling ring, with WWE legends, really took it to another level.

Hughes, for his part, was quite a fan of his big Wednesday night:

What a night #blessed #warriorforlife