Watch: Golden goal header puts No. 7 Washington over No. 2 Stanford

No. 7 Washington knocked off No. 2 Stanford in an in-conference battle that resulted in a last-minute goal for the Huskies. The win puts Washington atop the Pac-12 as they handed Stanford its first loss on the season.

The match was locked up 1-1 for most of the match, as Lucas Meek met a cross from Blake Bodily at the back post to give the Huskies the victory, 2-1. The golden goal came in the 105th minute in double-overtime.

Meek’s heroics came in an overtime period where Washington was really ramping up the pressure. A little razzle-dazzle move from Bodily freed him for an excellent cross. What looked like it would be met by the head of defender Ryan Sailor, snuck passed him when he laid out, but luckily for the Huskies Meek was there fully-extended as the beautiful header met the back of the net.

105′ – Meek starts the play and ends it with the diving header as the Huskies knock off No. 2 Stanford in double OT!! Great run by Bodily who gets the assist.

Washington came out of the gate hot, as Gio Miglietti clocked his first goal of the season in the 15th minute putting them up 1-0 early. The Huskies were knocking at the door throughout the match, but especially throughout the first half. They fired off 11 shots in the first 45 minutes and 21 throughout the whole match.

The second half was all Cardinal though, as Stanford scored quickly in the 47th minute. They got 7 shots off in the 2nd half, resulting in 7 corners and the goal by Zach Ryan. But it wasn’t enough, as Meek’s header is what carried Washington to victory.

The result puts Stanford’s record at 7-1-1 on the year, as the Huskies improve to 9-1. The Cardinal hosts Oregon State in their next match when the Beavers come to town on Sunday, Oct. 6. As for the Huskies, they’ll remain in the Bay Area when they face Cal on Oct. 6 as well. Stanford vs. Washington men’s soccer: Preview, history, how to watch

No. 2 Stanford last faced off with a ranked opponent on Sept. 2. On Thursday, the Cardinal welcome No. 7 Washington to Palo Alto for a top-10 matchup between Pac-12 foes. 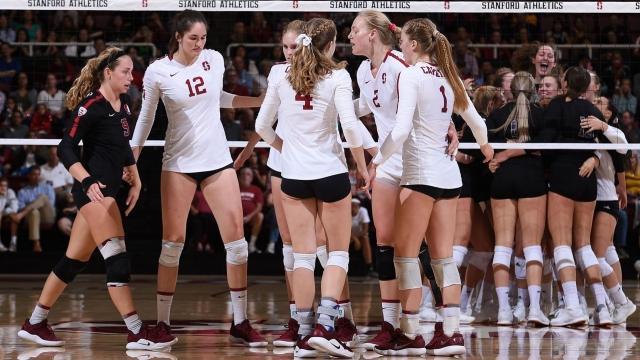 Thirty NCAA women’s volleyball student-athletes were selected on Oct. 2 as candidates for the 2019 Senior CLASS Award.