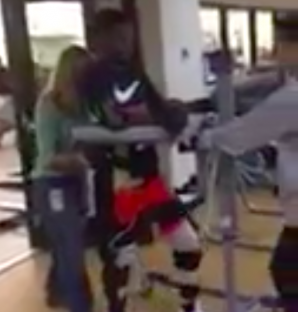 WATCH: Former Southern receiver Devon Gales, who was paralyzed by hit in 2015, walks for first time

Former Southern wide receiver Devon Gales’ collegiate football career came to an abrupt end on Sept. 26, 2015 following a collision with former Georgia kicker Marshall Morgan while Gales was blocking on a kickoff return. Gales remained down on the turf after the hit and was paralyzed from the waist down.

Nearly two years since undergoing spinal surgery, Gales has made a major stride in his ongoing recovery. On Thursday afternoon, Gales posted a video of him walking for the first time since his final game in pads for the Jaguars. The video, shared on Gales’ Twitter account, is accompanied by the caption, “I’m on the way!!”

Im on the way!! pic.twitter.com/4Kz77luWdT

Gales was a redshirt sophomore at the time of his injury. He was released from his hospital in Atlanta in February of 2016, five months after the collision, and was honored by the University of Georgia community before returning to his home in Louisiana. This past October, he was hosted by Miami (Fla.) — where former Georgia coach Mark Richt is now at the helm — for a game against North Carolina.

Gales’ first steps on Thursday is remarkable news. Good luck to him as he continues his recovery.