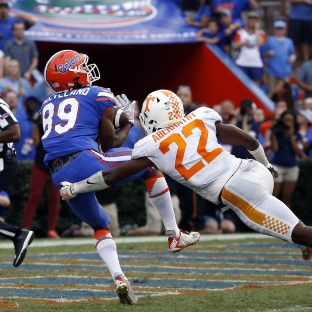 After just nine total points were scored through the first three quarters between Florida and Tennessee, the ending didn’t disappoint.

The back-and-forth, nail-biting fourth quarter was answered with a prayer when Gators quarterback Feleipe Franks unloaded a Hail Mary from Florida’s own 37-yard line for the win.

Franks was flushed to his right escaping the Vols’ pass rush when he saw Tyrie Cleveland put his hand up behind the Tennessee defense. The redshirt freshman set his feet and unleashed a perfect strike that traveled over 63 yards in the air, landing perfectling in the arms of Cleveland with no time left to cap off a 26-20 win at Ben Hill Griffin Stadium.

The Vols had converted a 27-yard field goal to tie the game at 20 before the Gators took possession with less than one minute left. After Florida picked up 12 yards on three plays on the ensuing drive, Franks delivered the perfect strike on the final play of the game.

Here’s what Cleveland had to say after the game: