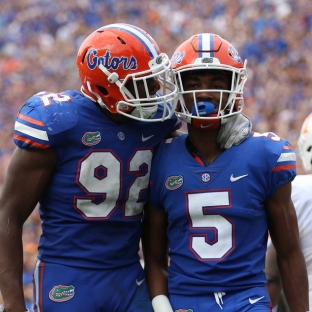 Pick sixes in college football are sometimes some of the most difficult plays to execute, given the amount that has to go right to be executed properly.

That wasn’t the case for Florida defensive back CJ Henderson against Tennessee on Saturday.

With the Vols backed up on their own seven-yard line, Tennessee quarterback Quinten Dormandy’s pass sailed high abd tipped off the hands of wide receiver Marquez Callaway right into the arms of Henderson.

Henderson, a true freshman, went untouched as he returned the interception 16 yards for Florida’s first touchdown of the game, giving the Gators a 13-3 lead early in the fourth quarter.

Third pick of the day for @GatorsFB.

Their third pick six of the season. pic.twitter.com/AfB7fBziIs

That was the second pick six in as many games for Henderson as the Gators had two in their Week 1 loss against Michigan.

.@HendersonChris_ is the first Florida player since 1996 to record a pick-six in consecutive games.

Not a bad start to his collegiate career.