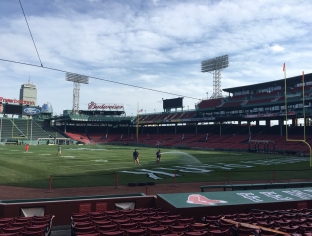 America’s oldest Major League ballpark has a new look to it. Inside the Pesky and Fisk foul poles with the Green Monster as a backdrop, hash marks and a pair of field goal posts now stand in place where the Boston Red Sox have called home since 1912.

As part of the Gridiron Series, three college football games will be played at Fenway Park in Boston, Massachusetts over the coming weeks that will feature six New England schools; three FBS teams and three FCS teams. In the first matchup, Brown faces Dartmouth on Friday, Nov. 10 in a historic Ivy league rivalry that’s older than Fenway itself. On the following day, Saturday, Nov. 11, Massachusetts squares off against Maine in their second meeting since the Minutemen moved up to the FBS in 2012. Boston College will take on Connecticut the following weekend, Nov. 18, to conclude the trio of games.

“There’s enough interest from college and high school teams to do this every year. That would be fantastic,” Red Sox team president Sam Kennedy told the Boston Globe on Jan. 13, “We’ll see how it develops but we’d like to keep it going.”

Check out some of the sights and sounds from Fenway’s transformation into a football field:

#FenwayPark is transforming into a football field, one goal post at a time! pic.twitter.com/B3qIcWfepv

MORE: Can Oklahoma State sneak into the CFP? | Miami on the right path

The diamond is GONE.

Ticket information and seating charts can be found on the Red Sox team website.