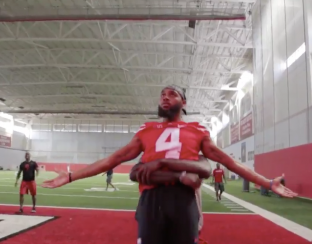 Brandon Armstrong has made a name for himself online for impersonating some of the most recognizable NBA stars and their unique styles on the court. From Kobe Bryant’s contested fadeaways to Steph Curry’s ballhandles and mouthguard antics to LeBron James’ signature “stomp” celebration, Armstrong has all the moves covered.

Now Armstrong has taken his talents to the gridiron.

His first impersonation paid homage to the classic ending to this past year’s Ohio State-Michigan rivalry game that ended with a 15-yard touchdown run from Samuel in double overtime. Lining up in a No. 4 Ohio State jersey — Samuels’ old number — Armstrong took the mock draw handoff and sprinted past his “defenders” before leaping into the end zone with both arms spread outward.

Armstrong followed that take by poking fun at Meyer’s reaction right after Samuel’s run against the Wolverines, when he collapsed to the ground in relief after the grueling victory.

Here’s to hoping next year’s rivalry game in Ann Arbor will cultivate another memorable — and mimicable — ending.