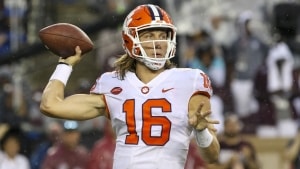 
Dabo Swinney seems keen on playing both of his quarterbacks, Kelly Bryant and Trevor Lawrence, early in the season, and the decision continues to pay off.

Lawrence, the 6-6, 215-pound true freshman, entered for Bryant on the third drive of the game against Texas A&M and threw a 64-yard touchdown pass on his first play from scrimmage.

The play was more impressive on the receiving end, with sophomore wideout Tee Higgins catching the ball over a defender at the 40-yard line of Texas A&M and then running away from the rest of the defense to the endzone.

Bryant started the game again for the second-ranked Tigers, but Lawrence is also getting plenty of playing time. Before Lawrence entered the game, Bryant led the Tigers on a 7-play, 75-yard touchdown drive.

In Week 1 against Furman, Bryant completed 11-of-17 passes for 132 yards and one touchdown, while Lawrence threw for three touchdowns on 9 of 14 passing for 137 yards.