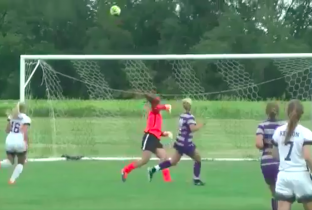 In the Crusaders’ first game of the year, a nail-biter against Kenyon, neither side was able to break through in the first 90 minutes of regulation time, and six minutes of overtime, despite a combined 25 shots between the two teams.

But in the 97th minute, Murry took a perfectly-placed through ball from senior defender Caroline Hester and, just before Kenyon keeper Jillian Countney could break up the scoring chance, Murry rocketed an exceptional right-foot shot that found the upper left-hand corner of the goal.

The shot was Murry’s first of the game; to say she saved her best for last would be an understatement.

Murry scored six goals on 18 shots in 17 appearances as a freshman with the Crusaders last season, including one winner.

Now, she’s got herself another.