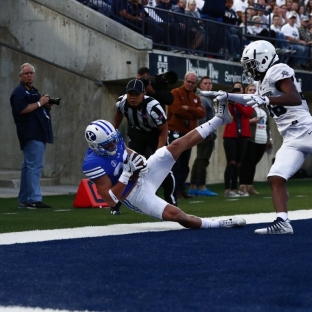 It wasn’t a bad first touchdown reception in a BYU uniform, either.

Falling out of bounds, Tanner’s body was nearly parallel to the ground when he caught a touchdown along the sideline in the endzone against Utah State. He barely landed his right foot inbounds to secure a second quarter touchdown that was later confirmed after official review.

This crazy catch ended up giving @BYUfootball a 21-7 lead after the official review. pic.twitter.com/yayHYqU4NH

Tanner had just three receptions on the season entering Friday night’s game against Utah State. His touchdown gave the Cougars a 21-7 lead with 13:30 remaining in the quarter. The 6-foot junior receiver has appeared in all four of BYU’s game this season after transferring from Scottsdale Community College prior to the 2016 season.