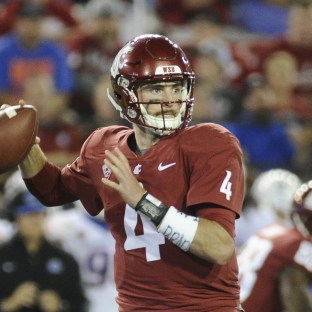 The Pac-12 has been home to some of college football’s best quarterbacks and past Heisman trophy winners, and now Washington State’s Luke Falk stands alone atop the decorated list in one major category.

The redshirt-senior quarterback appeared in six games during his freshman season, starting the final three for Washington State. He threw for 4,566 yards during his sophomore campaign and last year totaled 4,468 passing yards. Through nine games entering Saturday, he has passed for 2,573 yards in 2017.

Falk threw for 173 yards and two touchdowns in the first half Saturday to break the record.

With 173 yards in the first half, Luke Falk (@wsucougfb) has broken the Pac-12’s career passing yards record. pic.twitter.com/kWhT192nYK

Washington State has two regular season games remaining at Utah and No. 12 Washington before postseason play.

* Falk’s stats as of halftime on Saturday